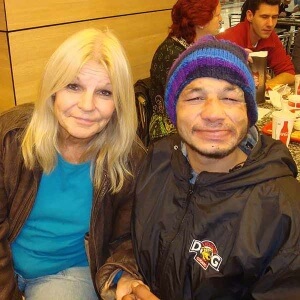 This is my favorite street boy. His name is Radu. I’ve known him for 16 years, having met him on my first visit to Bucharest when he was around 7 years old. He is just one of the children that no one wanted and so he was put out on the street to survive or die by an unknown mother. There are several thousand children like Radu but few have the sense of mischievous, well-intentioned energy that set him apart. Radu was the unofficial mayor of the street children. He knew where individuals lived, who needed Pampers for their newborn, and who relocated and where. He never went to school, came to us when he needed medical attention because we had to take him to the hospital for treatment or he would have been turned away. He once told me that he survived because he never took anything that wasn’t his and never looked for trouble. As hard as we tried to take care of Radu he would not sleep inside preferring the streets or the subway tunnels where he could be off by himself. We do not know where Radu was sleeping on Holy Thursday but the police called us on Good Friday to tell us that he was dead. He died as he lived in quiet neglect and implied violence yet he had enthusiasm for life and always cared for those around him in the same tragic circumstances. He was my good friend and my example that the human spirit is alive and well even in the most heartbreaking of environments.

There is a growing population of Radus in Bucharest, Romania. They are on no one’s radar and invisible to most of the world. Because they are hidden from the world, they are easily overlooked and because their needs are so great and their situations so dire it is easy to turn one’s back. Large foundations have parameters that exclude small 501(c)(3) organizations because the hierarchies never get to see a face like Radu’s. Our little organization stumbles along putting out fires as they flare up but never getting close to the source of the conflagration. It is fitting now that Radu, my Radu, becomes the face of all the lost children that most of the rest of the world will never know about. I know there is a way to help these children on a scale that will allow them to join the mainstream and have a healthy, productive, and happy life. Radu was trying to chase that modest dream – he just ran out of time. If anyone out there has suggestions on how to get these children into the consciousness of the world, or the ears of large philanthropies please let me know. We have been operating for 16 years on the kindness of individuals who believe in what ARCHWAY is trying to do. There are more foundations and corporations out there than you can shake a stick at – but they don’t know about our kids. The Radus of the world slip through the cracks. Please don’t allow Radu’s passing to be in vain. Please help us find allies in our mission of filling those cracks. ARCHWAY Romania needs donations to keep our organization viable and to help these abandoned children of Romania. Please consider donating to our general fund today.

← Let’s All Talk About Abandoned Children of Romania
ARCHWAY Romania is seeking charitable organizations to help us help the children left behind on the streets of Romania →
Log in here!